Seeing two shadows inch across Jupiter’s face is very uncommon, and three are as rare as a good hair day for Donald Trump.

Averaged out, triple transits occur once or twice a decade. Friday night Oct. 11 each moon enters like actors in a play. Callisto appears first at 11:12 p.m. EDT followed by Europa and then Io. By 12:32 a.m. all three are in place.

Catch them while you can. Groups like these don’t last long. A little more than an hour later Callisto departs, leaving just two shadows. You’ll find the details below. All times are Eastern Daylight or EDT. Subtract one hour for Central time and add four hours for BST (British Summer Time): 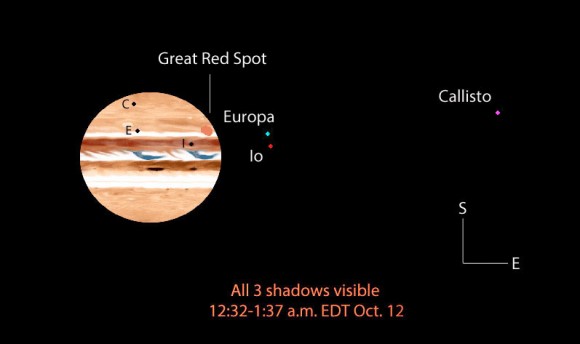 Copernicus had those Renaissance ladies
Crazy about his telescope
And Galileo had a name that made his
Reputation higher than his hopes
Did none of those astronomers discover
While they were staring out into the dark
That what a lady looks for in her lover
Is Charm, Strangeness and Quark
HAWKWIND - QUARK, STRANGENESS AND CHARM